Elon Musk has lately cracked the deal of the year, as he takes social media giant “Twitter” under his banner. The deal was for 44 Billion USD, the news of the takeover has been interpreted by various personalities in different ways, as some feel that it will suppress the right of speech and are leaving the platform, while others feel that the technological genius will be instrumental in taking the platform to new heights. Although the hypocrisy remains over this acquisition, at the same time the fraudsters have also made complete use of the opportunity for committing data and identity thefts, the two most common cyber crimes.

As the news of the twitter takeover has been floating on all social media platforms hence everyone is well aware of the deal that took place and all the users of the platform are keen to see what kind of changes/ updates comes on the platform with the new owner. The fraudsters have taken note of the situation and have also established a modus operandi for the same. People across the world have started to get notifications stating their ‘Blue tick’ will disappear, the blue tick here signifies that users account has been verified by the company and the user has been following the socio and political guidelines set on the platform. The link will actually be a decoy message by hackers/fraudsters to get hold over the users personal data, as soon as the user clicks on the link to verify his/her account again, he/she will be taken to a page which has a similar layout as that of twitter and ask the user to enter his/her details so that they login again and further this login will be used to verify the account. 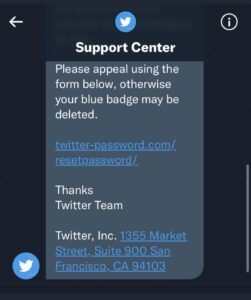 This link is not real as no announcements regarding changes in Twitter have been made publicly. The users who fall into this trap have reported that their twitter account has been hacked and  some cases of identity thefts have also been registered. This act clearly shows how the blackhat hackers have always tried to stay in tune with the current time and technology in order to maintain their dominance for illegal activities all across the platforms. One should stay wary of these kinds of links as it is really difficult to figure out the real purpose of the link and thus this causes more people to fall prey to such crimes.

The cyber security world has been very sensitive in nature and is evolving a pace faster than the previous decades, but even in current high speed connectivity times the best weapon against cyber crimes is awareness, henc being aware of such new and latest scams is of paramount importance and is also part of one’s civic duty. One can prevent such cyber crimes by following ways-

Such deals will keep taking place even in the future, but one thing which is certain that the hackers/fraudsters will never stop and will coming your way with new and innovative methods and as the citizens of the cyber world it is our duty and responsibility to see through these kind of scams and make sure that everyone is so well aware of the crimes that they are never the victim of such crimes.